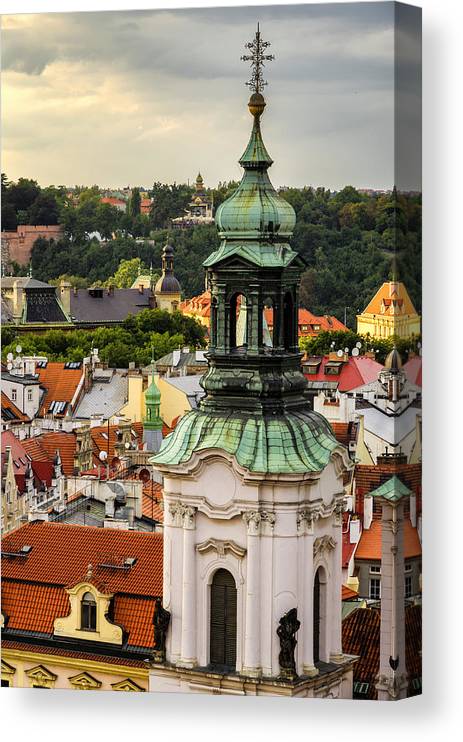 Rooftops of Prague 1 canvas print by Pablo Lopez.   Bring your artwork to life with the texture and depth of a stretched canvas print. Your image gets printed onto one of our premium canvases and then stretched on a wooden frame of 1.5" x 1.5" stretcher bars (gallery wrap) or 5/8" x 5/8" stretcher bars (museum wrap). Your canvas print will be delivered to you "ready to hang" with pre-attached hanging wire, mounting hooks, and nails.

The sun rays bathe the city of Prague at the end of the day, the moment in which the light is able to extract all the intensity to the colors, making... more

Thank you so much, Judy! Kind regards.

The sun rays bathe the city of Prague at the end of the day, the moment in which the light is able to extract all the intensity to the colors, making this view of the rooftops and forests quite a sight to behold.Prague, or Praha in Czech, is the capital and largest city of the Czech Republic. It is the fourteenth-largest city in the European Union. It is also the historical capital of Bohemia.Prague is home to a number of famous cultural attractions, many of which survived the violence and destruction of 20th-century Europe. Main attractions include the Prague Castle, the Charles Bridge, Old Town Square with the Prague astronomical clock, the Jewish Quarter, the Lennon Wall and Petrin hill. Since 1992, the extensive historic centre of Prague has been included in the UNESCO list of World Heritage Sites.Prague is the fifth most visited European city after London, Paris, Istanbul and Rome.

Thank you so much for coming by to view my artwork. I am a portrait and travel Spanish photographer, currently living in Madrid and taking every chance to visit new countries and explore new places. If you would like to download my images for your commercial or personal use, you can do it through Licensing Pixels If you are interested in my artwork as prints, greeting cards or phone cases, you can find several options here or in my personal website, which you will find at PabloLopezPhotography.com I am also happy to receive any questions or thoughts. You can contact me through the link on this page and I will answer promptly. Thank you again for visiting. I really hope you enjoy my work.